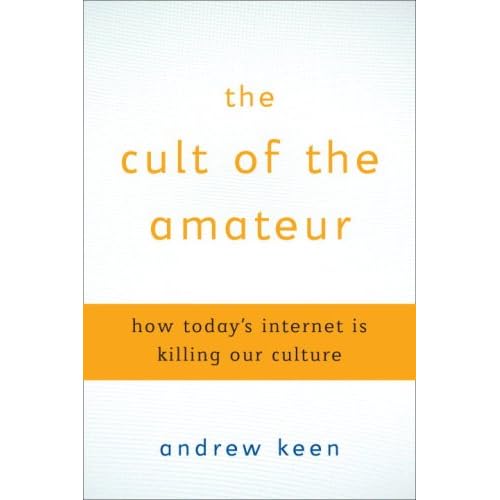 Andrew Keen discusses the dangers Web 2.0 and mob rule. While I’m only a little ways into the book, so far his talk so far on blogging and Wikipedia and what it can do at its worst is very interesting. I don’t agree with some of his statements in the introduction on matters such as declining music sales related to piracy but I’ll give the rest of the book to flesh that out.

Out of this anarchy, it suddenly became clear that what was governing the infinite monkeys now inputting away on the Internet was the law of digital Darwinism, the survival of the loudest and most opinionated. Under these rules, the only way to intellectually prevail is by infinite filibustering.

I’ve seen the infinite monkeys, of course, typing away. And I’ve seen many other strange sights as well, including a video of marching penguins selling a lie, a supposedly infinite Long Tail, and dogs chatting to each other online. But what I’ve been watching is more like Hitchcock’s The Birds than Doctor Doolittle: a horror movie about the consequences of the digital revolution.

Because democratization, despite its lofty idealization, is undermining truth, souring civic discourse, and belittling expertise, experience, and talent. As I noted earlier, it is threatening the very future of our cultural institutions.

I call it the great seduction. The Web 2.0 revolution has peddled the promise of bringing more truth to more people—more depth of information, more global perspective, more unbiased opinion from dispassionate observers. But this is all a smokescreen. What the Web 2.0 revolution is really delivering is superficial observations of the world around us rather than deep analysis, shrill opinion rather than considered judgment. The information business is being transformed by the Internet into the sheer noise of a hundred million bloggers all simultaneously talking about themselves.

Since contributors to Wikipedia and YouTube are frequently anonymous, it’s hard for users to be certain of their identity — or their agendas. Postings about political candidates, for instance, can be made by opponents disguising their motives; and propaganda can be passed off as news or information. For that matter, as Mr. Keen points out, the idea of objectivity is becoming increasingly passé in the relativistic realm of the Web, where bloggers cherry-pick information and promote speculation and spin as fact. Whereas historians and journalists traditionally strived to deliver the best available truth possible, many bloggers revel in their own subjectivity, and many Web 2.0 users simply use the Net, in Mr. Keen’s words, to confirm their “own partisan views and link to others with the same ideologies.” What’s more, as mutually agreed upon facts become more elusive, informed debate about important social and political issues of the day becomes more difficult as well.